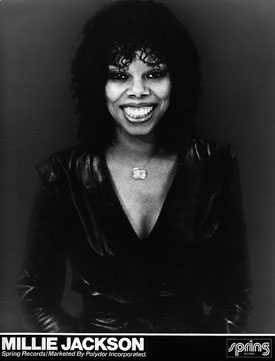 Millie Jackson is much more than an entertainment legend. The shapely, charismatic and multi-talented entertainer is without a doubt, a music industry icon.

Her often criticized career paved the way for many of today's forward female recording artists and entertainers.

Not only has her lengthy career attracted fans from all walks of life along the way; it's rumored that Bette Midler and Roseanne took pages from Millie's high voltage explicit approach to sex, to enrich their respective careers.

In spite of being stamped bawdy, brash and bad, Millie is the epitome of performance perfection on stage. She has no peer in this department!

Several years ago, she added a new dimension to her established legendary career. She created, financed, directed and starred in a hit musical stage play that was based on one of her previous recordings, "Young Man, Older Woman."

During the play's touring years, audiences (old and new) discovered that Millie Jackson was equally at home as an actress, as she was singing songs in a musically mesmerizing manner.

It's overwhelming success prompted David Patrick Stearns of USA Today to write a feature article, citing Millie as an astute businesswoman and lauding her, for her ability to turn her brand of risque music into stage play success.

In Los Angeles, actor/comedian Martin Lawrence created a special role for her to play on his popular TV sitcom after seeing her perform in "Young Man, Older Woman" at the Wiltern Theatre.

It's definitely no stage joke that her career was launched in a New York night club on a bet. It happened in a Harlem night club shortly after she finished high school.

Winning the bet by performing resulted in Millie's metamorphic rise from a fledgling performer to a world-renown electrifying entertainer. Her first record release, "A Child of God," on Spring Records, more or less set the tone for what was to come with sexual and social hypocrisy from the transplanted Georgia native.

Her debut album resulted in Millie being named "Most Promising Female Vocalist" by NATRA, a now defunct radio and record industry organization.

Both her powerful vocal prowess and her ability to gather material to fit perfectly into the philosophical tune trends of the times surfaced when her next album was released. Then, with the help of Brad Shapiro, she started producing herself.

Their team efforts produced 'gold' for the album "Caught Up". They also wrote history in the annals of the recording industry. Over the ensuing years, Millie's name became synonymous with a streak of hit albums.

"Get It Out Cha System," "Feelin' Bitchy," "Hard Times," "A Moment's Pleasure," "Live and Uncensored," "For Men Only," "I Had To Say It," "A Little Bit Country" and "Live and Outrageous" were some of the albums that earned Millie more 'gold' on Spring Records and added to her liberated lyrical approach.

A few years later she produced and performed on an album with Isaac Hayes. The collaboration was entitled "Royal Rappin's".

Her next duet recording effort was in 1985 with pop recording star Elton John. The single's release and music video, "Act of War," made the national pop charts and resulted in Millie becoming a crossover artist.

The success of this duet with Elton paved the way for her first booking as a headline act at Universal Amphitheater in Los Angeles. Millie's Amphitheater performance earned her a tie for a 'Best Concert Performance Award' with Sting, in an annual poll conducted by the Los Angeles Reader Newspaper.

Jive/Zomba Records, an English-based record label distributed by RCA Records was Millie's next label after Spring Records. Four albums and several singles were released during her tenure there. Two of the singles reached the national Top Ten R&B music charts.

Ironically, "Young Man, Older Woman" was the last album Millie recorded for the label. It was also the title that caught her fancy when she decided to write and produce her first play.

To satisfy public demand for the play's soundtrack album, Millie struck a deal with Georgia-based Ichiban Records to record and release the "Young Man, Older Woman" cast album. Its success prompted a second album, "Rockin' Soul". This album showcased her ability to successfully bridge the musical gap between 'soul' and pop music.

Her third album with Ichiban Records was entitled "It's Over!??" This was the soundtrack album for her second musical stage play, "The Sequel (It Ain't Over)". In her humorous innate way she described her third album for Ichiban, as "Well, we finally got the punctuation dilemma settled!"

It also robbed waiting audiences around the country from seeing and hearing the legendary R&B singing trio of Ray, Goodman and Brown; Douglas Knyght Smith (her "younger" co-star from the first play), Keisha Jackson, and Antonio Fargas ("Huggie Bear" from Starsky & Hutch) on stage with Millie Jackson, doing their acting and singing thing in her all new hilarious musical stage play.

Of the many songs recorded and released by Millie over the years, her "Phuck-U-Symphony" remains the most re-recorded. She appeared in the movie "Wigstock," and was dubbed the Mother of Hip Hop by Da Brat who asked Millie to appear on her last album.

This record session lead to Millie being called on to do a Sprite television commercial.

In recent several years Millie has been doing her daily radio show on KKDA in Dallas, Texas, from various locations around the country. Besides broadcasting, the inspiration to record again has came knocking.

Rather than go through changes with other record labels, she decided to launch her own label and record the types of songs and material that made her the outspoken, sexually liberated Millie Jackson that people loved and flocked to see.

The name of her new record label is Weird Wreckuds featuring her album "Not For Church Folk!"