Mary Wilson - Dreamgirl My Life as a Supreme 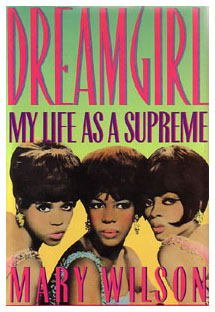 January, 2007 | Dreamgirl: My Life as a Supreme | When Mary Wilson, one of the original Supremes, saw the Broadway production of "Dreamgirls" over 20 years ago,
she says she was crying by the second act.

"I knew in my heart that this story rang far truer than the producers could have imagined." Recently, Motown great Smokey Robinson slammed the movie "Dreamgirls" for depicting "false information."

"I was awed at the powerful influence of the Supremes legacy. And I was more determined than ever that the real story be told."

With so much controversy surrounding the authenticity of the Dreamgirls movie, (even though it is fiction loosely based on fact), let's examine Mary Wilson's side of the story the way she remembers it.

Mary ends her version of "Dreamgirl" with emotional reflections revealing her grief over the tragic passing of original Supreme Florence Ballard.

Despite some clear finger pointing at Diana Ross as the source of competitive tension within the group, once
success called, Mary, Diana, and Flo all contributed their share of "diva madness," with each lady requiring some high maintenance "hand holding."

The notion that any of the three ladies could have been the ideal lead singer for the group is a theme that Mary focuses on throughout her story.

Ironically, it wasn't until 1964's "Where Did Our Love Go" featuring Diana that the Supremes brought home a hit.

They signed with Motown in 1961, initially floundering with songs that failed to click with fans. Most of these tracks were without Diana as the lead vocalist.

Overall, Mary has good things to say about Motown founder Berry Gordy. The "beyond business" relationship between Gordy and Diana Ross is tastefully told.

Wilson provides interesting biographical tidbits about each Motown personality mentioned in the book.

Wilson claims that attendance in "Artist Development" was never mandatory.

By today's standards, some of the Supremes "charm school" "Artist Development" guidelines seem silly. I got a big laugh when each girl was instructed what to do if another "accidentally picked up her chicken with her fingers."

Mary hammers home first and foremost her belief that the Supremes were a group. Not every member of the quartet (later to become a trio) thought the same way.

Strong egos driven by lead singer ambitions strained the professional relationship between Mary and Diana, and Diana and Flo.

However, these teenage friends from Detroit who would rise to become the dominant female group in the world during a 5 year period had some strong bonds that not even international success could destroy.

Mary talks of a strong friendship with Florence Ballard. Wilson indicates how Diana Ross drifted away from very tight spiritual connections with her and Flo Ballard.

Wilson isn't exactly an angel. We get the scoop about her relationship with Duke of the Four Tops, (who moved into her house while he was separated from his wife).

As a matter of fact, the hanky panky going on among the various Motown artists is dizzying, as couples pair off during tours, after performances, and after recording sessions.

Mary practically boasts of her long lasting love affair with the married Tom Jones. Further, she's proud to state, "I had a boy friend in every town, all around the world. I couldn't wait to meet new people and really enjoy myself."

Ms. Wilson tells many amusing stories, including the Beatles surprise at how "straight laced" the Supremes appeared during a private gathering in the fab four's room at the Warwick Hotel in New York City.

Another great tale is about how two of Diana Ross' dogs munched on some poison outside of the Supremes dressing room at the Latin Casino in Cherry Hill, NJ (June, 1969).

When the dogs started throwing up, Diana wanted to cancel the two week sold-out Supremes engagement.

Mary Wilson succeeds in telling a balanced story about how things really were in the world of the young Detroit dreamgirls.

They blossomed as "the Primettes," and exploded as "the Supremes," reaching new heights in popular music.

Between the cat fights, the early struggles, the affairs, the hits, the negative trappings of success, and the fun times on the road, "Dreamgirl: My Life as a Supreme" according to Mary Wilson clarifies many of the melodramatic assumptions some say are wildly exaggerated in "Dreamgirls," the movie.

Review written by King for the Powerhouse Radio Newsletter

Dreamgirl: My Life as a Supreme written by Mary Wilson
St. Martin's Press